UVA's Dr. Jeffrey Elias, who pioneered the use of high-intensity soundwaves to treat tremor and Parkinson’s disease, has now set his sights on erasing chronic pain.

In 2011, the University of Virginia’s Dr. Jeffrey Elias was among the first in the world to use focused ultrasound technology to treat patients with essential tremor, a condition akin to Parkinson’s disease that affects up to 10 million Americans.

Ten years later, UVA has become an epicenter for focused ultrasound technology, which uses concentrated, high-intensity soundwaves to generate heat so that a physician, guided by an MRI machine, can target specific areas without damaging surrounding tissue. It is less invasive than traditional surgical options, with fewer side effects and shorter recovery times.

Now, Elias’ patients leave without the tremors that have plagued their daily lives for years. One man, Stephen Witt of Strasburg, had a severe tremor in his right hand for more than 25 years, keeping him from writing, shaving or eating with that hand. After his first treatment in early February, the tremor was gone – “a complete success,” as a delighted Witt put it.

Elias, a professor of neurosurgery, the director of UVA’s Stereotactic and Functional Neurosurgery department and a member of the UVA Brain Institute, has received FDA approval for both the essential tremor treatment and a similar treatment for tremor caused by Parkinson’s disease. Both treatments are now used all over the world, and Elias and his team perform them weekly at the Focused Ultrasound Center he directs at UVA Health.

The buzz around focused ultrasound has only grown in Charlottesville. The Focused Ultrasound Foundation, established in 2006 by former UVA professor of neurosurgery Dr. Neal Kassell, is still based in Charlottesville. Kassell helped bring the necessary technology to UVA. Famed novelist and Charlottesville resident John Grisham, a friend of Kassell’s and a foundation board member, even wrote a book about the technology – his 2018 novella “The Tumor” was written to raise awareness of focused ultrasound treatments. 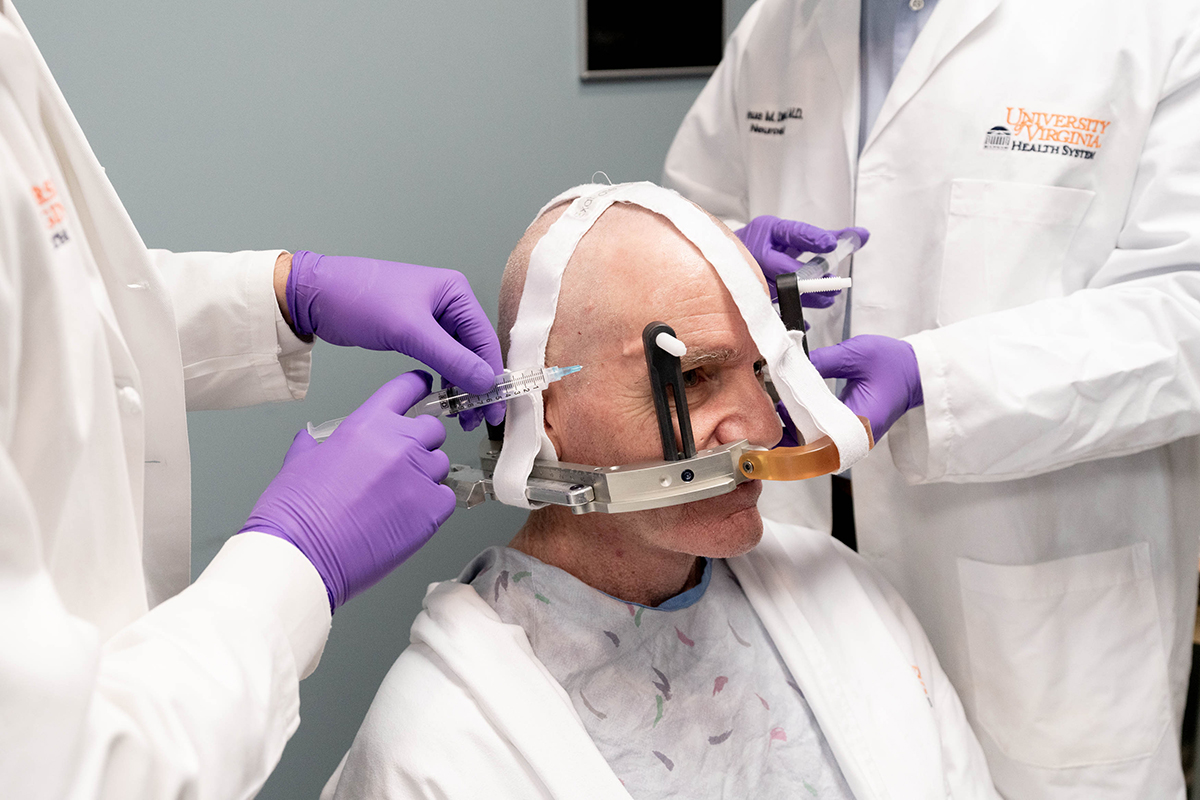 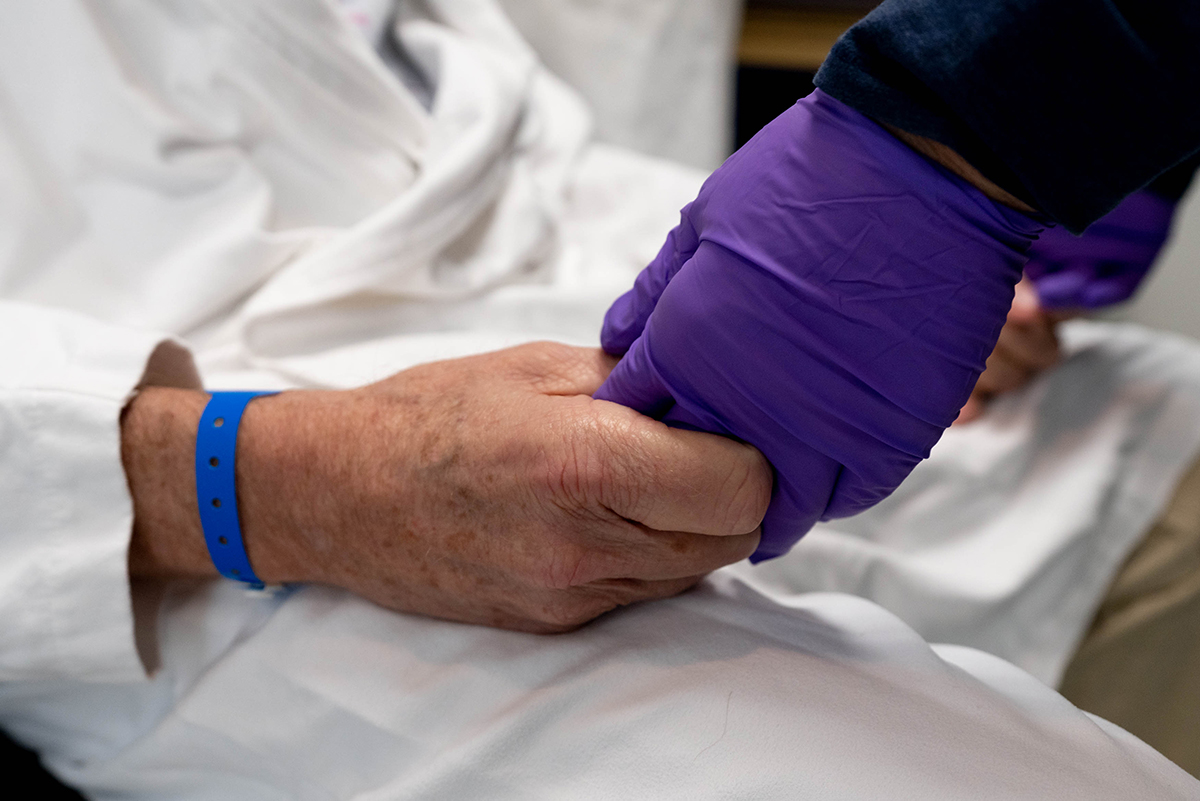 Above Dr. Elias and his resident Dr. Joshua Diamond inject a fluid under John Early’s skin in advance of the procedure, while registered nurse Kathy Maynard holds Early’s hand. 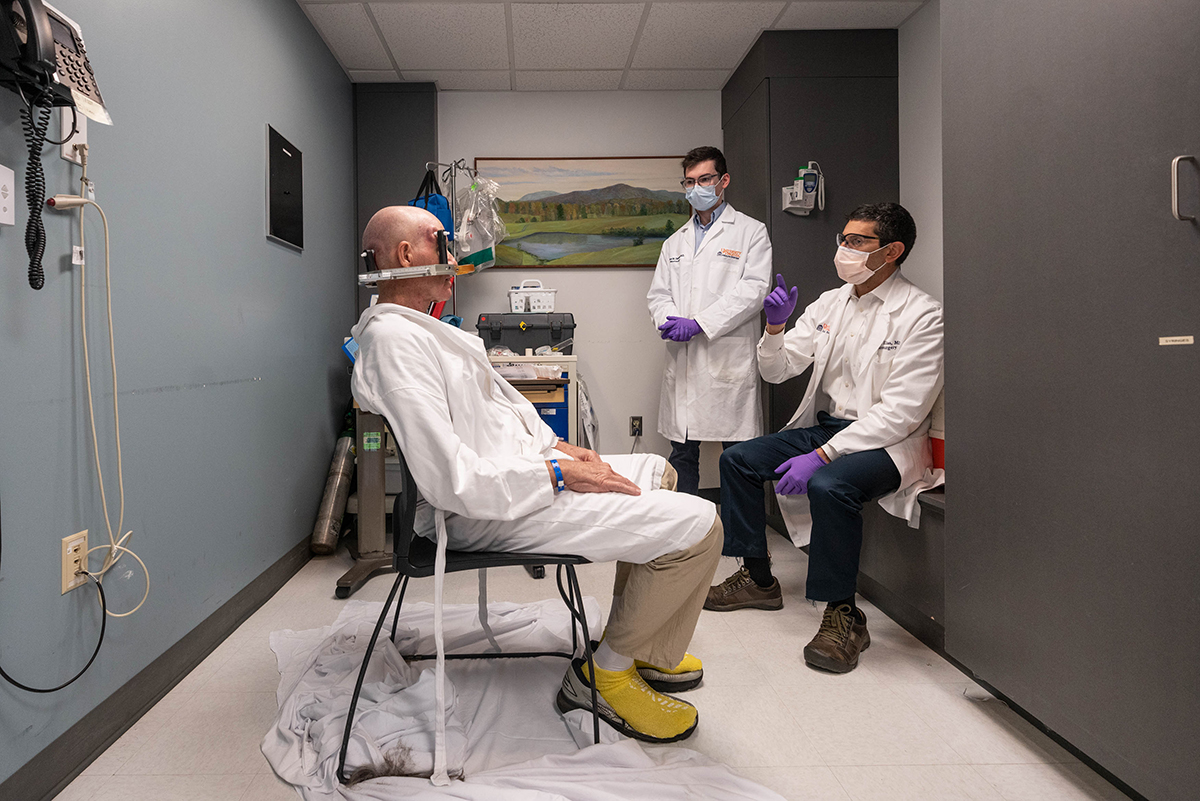 Above John Early discusses the procedure with Dr. Elias, right, and Dr. Diamond, center, with his head brace affixed. His hair had to be shaved for the procedure.

“I really did not know much about it. I am a neurosurgeon, and for us there has always been the barrier of the skull,” which physically blocks many interventions, Elias said.

Kassell, however, showed him MRI images of some of the earliest focused ultrasound procedures done in Europe, which were using lower- to mid-frequency soundwaves to partially pass through bone tissue. Elias was instantly intrigued.

“I could immediately tell that there was significant potential, especially in my field of functional and stereotactic neurosurgery,” he said. Functional and stereotactic neurosurgery is a subspeciality focused on various neurological and movement disorders, and often involving specific, precisely targeted treatments of different areas of the brain. Elias focused on treating tremors.

If a patient comes up to you and tells you that they got better, or their life improved, that is invaluable feedback.

In the procedure he developed, the patient is positioned in a helmet containing more than 1,000 different beams that can target ultrasound waves to a very precise point, and then enters an MRI machine. The doctor uses the MRI technology to watch the procedure in real time, steer the treatment exactly where it needs to go and monitor the patient’s reaction.

“There are not many procedures we can do where we can watch what is happening inside the brain in real time,” Elias said. “We can get lots of immediate feedback, which makes the procedure safer.” 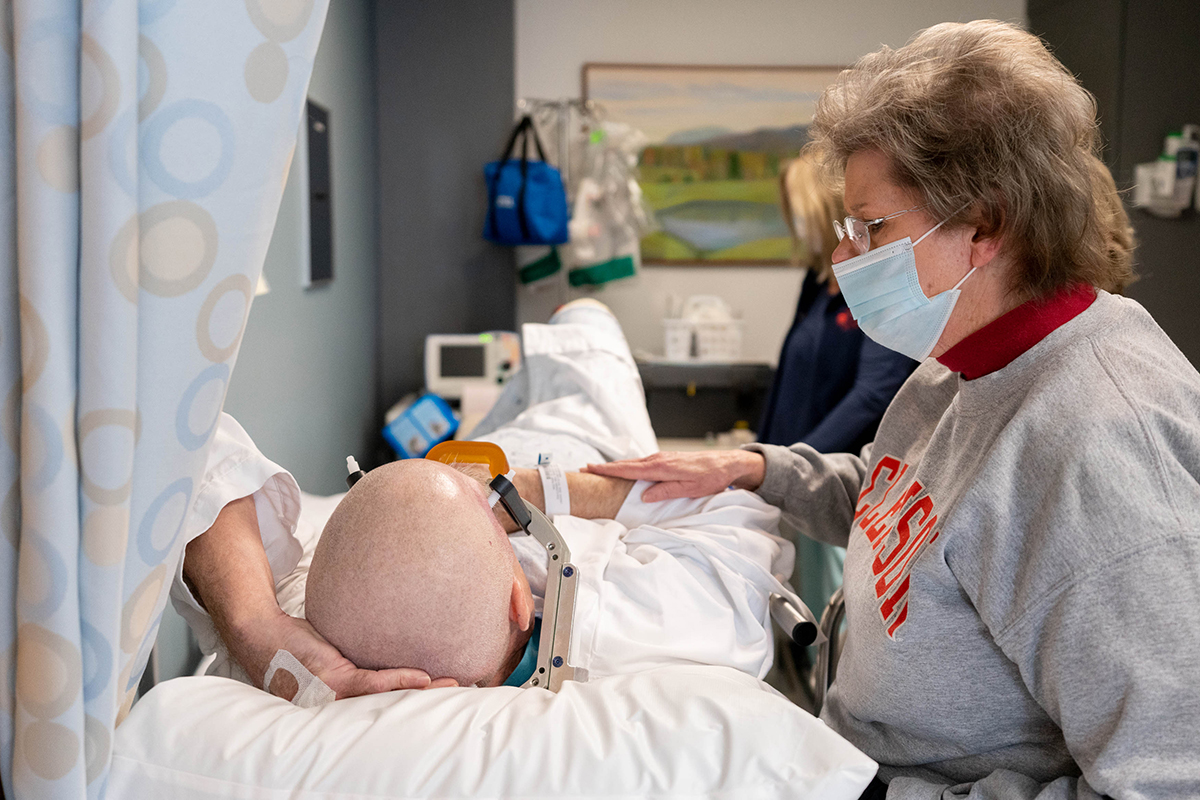 Above Stephen Witt and his wife Kay share a moment before he undergoes the focused ultrasound procedure.

Above As John Early sits on the bed of the MRI machine, Dr. Elias and Dr. Diamond fit him with a helmet containing more than 1,000 different beams that can target ultrasound waves to a very precise point.

There are some side effects, as some patients report mild numbness or transient imbalance in the days following the procedure. However, according to patients, the results are life-changing, often allowing them to do basic things – such as picking up a glass – and return to beloved hobbies and activities.

Witt, the patient whose treatment resolved a 25-year tremor, was excited about regaining use of his right hand after training himself to do everything with his left hand.

“Dr. Elias and his team were amazing,” Witt said. “They kept in close contact with me every step of the way. … He’s not just an amazing doctor, but an amazing person.”

Another patient, John Early, also was treated for tremor in his right hand. Now that it is gone, Early said, he anticipates feeling much more comfortable in social settings, especially.

“For me, before, one of the hardest things was eating and drinking. You might be out to dinner, or in a social situation with people you don’t know, and you can’t even pick up a drink,” he said. “The social problems are significant … even with my friends, who know and always told me not to worry about it, I still worried about it.”

Stories like these, Elias said, “are the ultimate validation or gratification.” 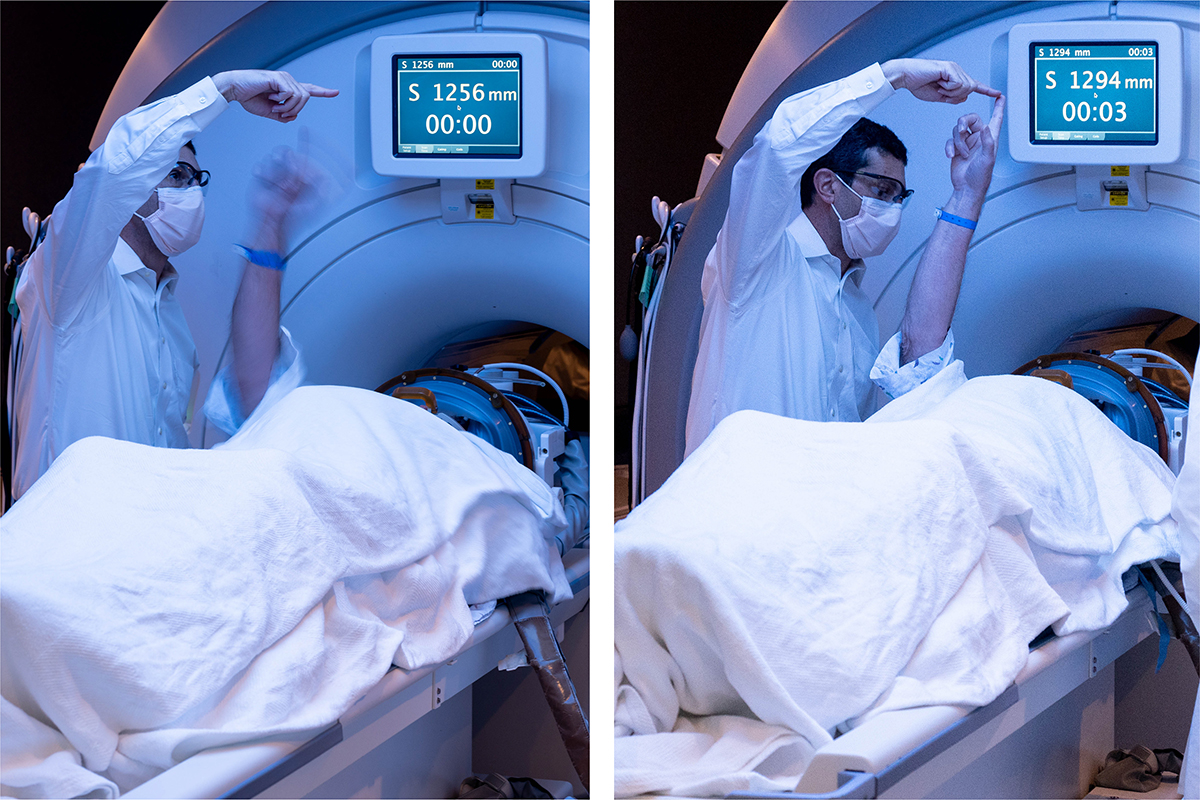 Above Stephen Witt before and after the procedure. These photos were taken approximately 45 minutes apart. In the photo on the left, Dr. Elias asked Witt to touch his finger, and Witt’s tremor was so severe that he could not. Afterwards, in the second photo, he was able to reach up and steadily touch Elias’ finger. 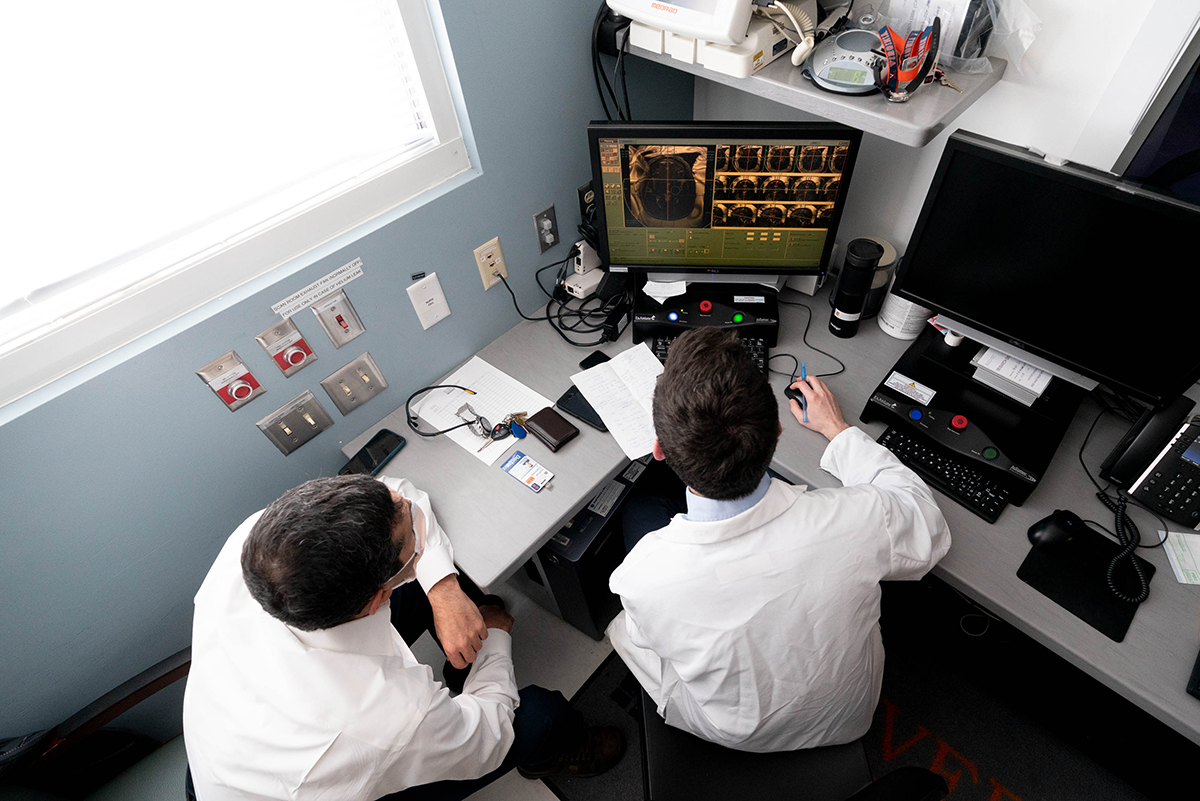 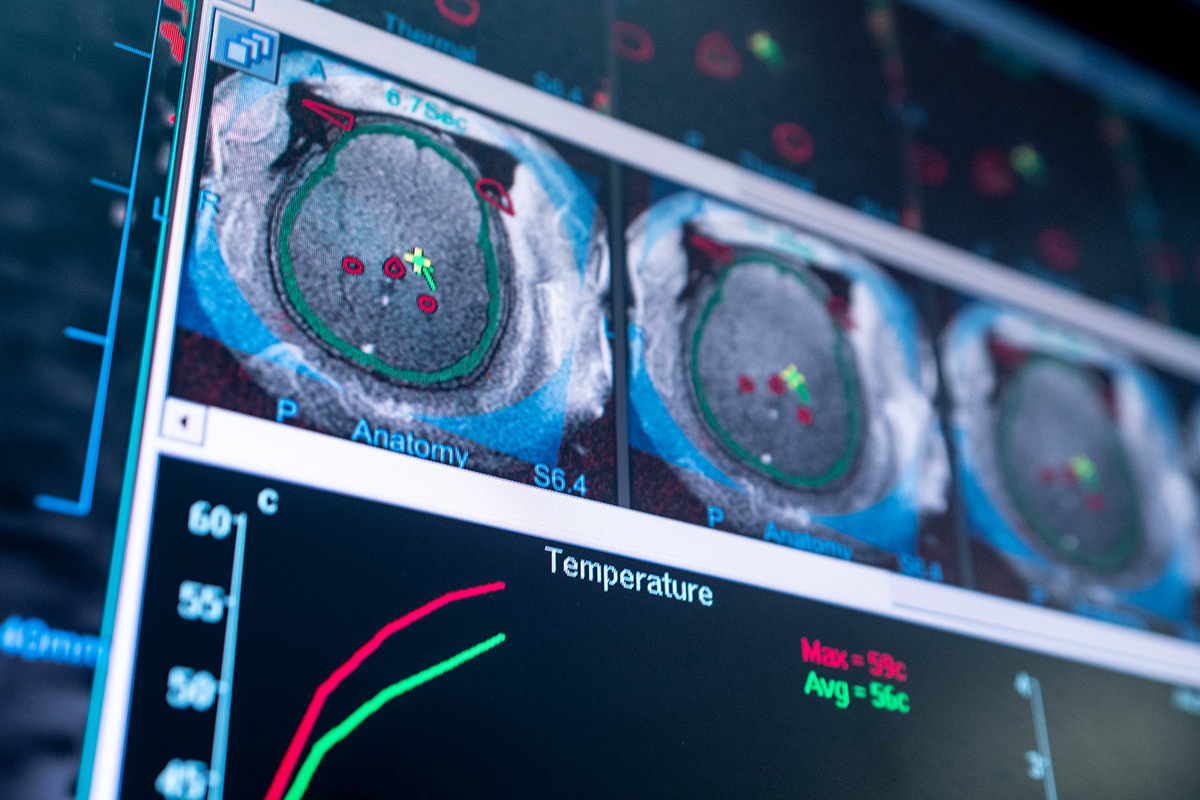 Above Drs. Diamond and Elias can use MRI technology to watch the focused ultrasound procedure in real time, steer treatment exactly where it needs to go and monitor the patient’s reaction. Elias said the immediate feedback makes the procedure safer.

Above John Early is positioned and ready to undergo his procedure. A sign on the door warns of the magnets in operation in the MRI machine.

“Sometimes, people in all fields, going about their daily work, don’t necessarily get to see the impact of that work,” he said. “If a patient comes up to you and tells you that they got better, or their life improved, that is invaluable feedback.”

The Next Target: Chronic Pain

With successful treatments for tremor and aspects of Parkinson’s disease under his belt, Elias is setting his sights on chronic pain, one of the biggest health problems in the United States.

“We have made a big pivot, with the support of UVA and the UVA Brain Institute, to investigate using technology to treat chronic pain,” Elias said.

The School of Medicine recently hired Chang Chia Liu, an assistant professor of neurological surgery who has spent his career studying chronic pain, to help with this effort, and there are two clinical trials ongoing – one using focused ultrasound to treat neuropathic pain that comes from nerve injuries, and one to treat pain associated with cancer.

The theory, Elias said, involves using focused ultrasound to interrupt particular pain circuits in the brain, essentially retraining the nervous system. In the case of cancer pain, the technology could also either directly target tumors or alter pain circuits from the tumor to the brain.

When you look back at how far we have come, there are now pretty significant treatments happening routinely, things that we were only just beginning to think of even a few years before.

The cancer study is supported by the NIH HEAL – Helping to End Addiction Long-Term – Initiative, which aspires to improve treatments of chronic pain as a way of solving America’s opioid addiction crisis. A 2018 Centers for Disease Control study estimated that 50 million U.S. adults are affected by chronic pain, with approximately 20 million suffering from high-impact chronic pain that interferes with their daily life and work.

The total financial cost of chronic pain to society was estimated between $560 billion to $635 billion in 2010, outranking the combined costs of heart disease, cancer and diabetes. In addition, treatment for chronic pain often involves opioids, fueling a broader opioid addiction crisis that is straining health care systems and wreaking havoc on people’s lives.

“Chronic pain is an incredibly important societal issue,” Elias said. “I am hopeful that we will soon see focused ultrasound as a major tool to treat pain problems, which is a pretty exciting thought.” 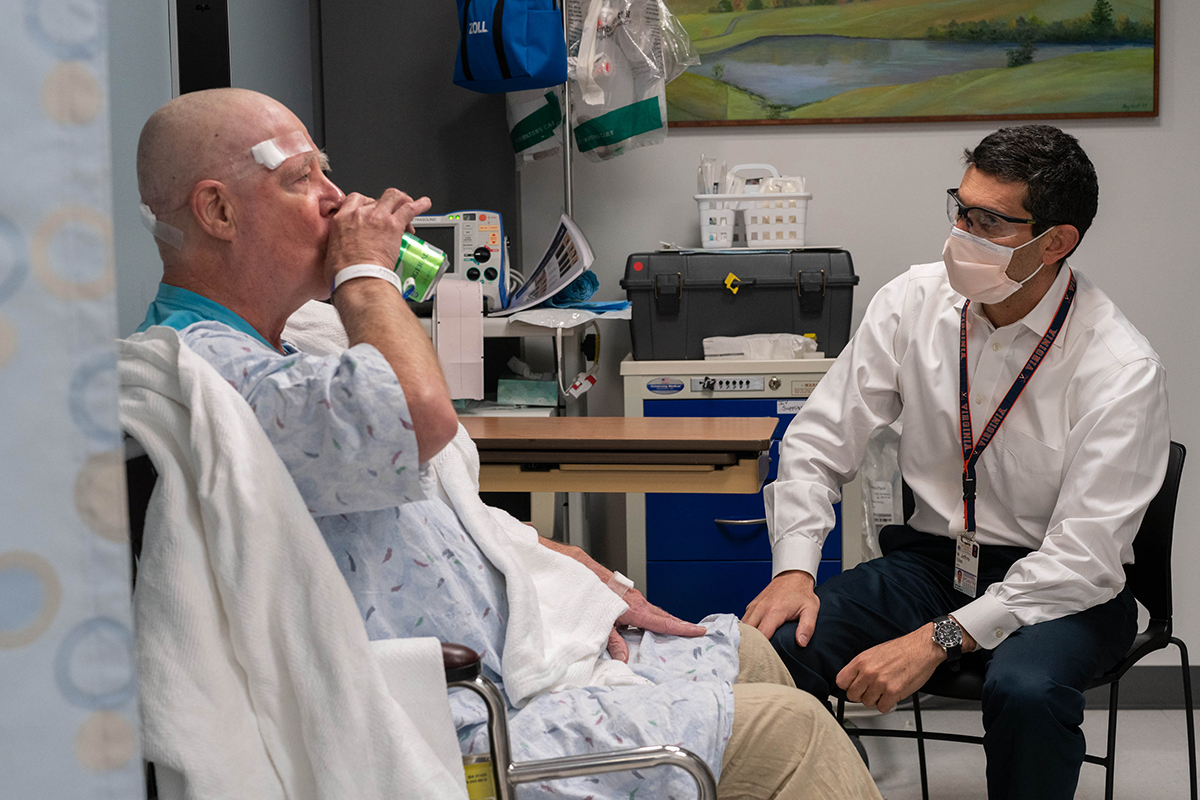 Above Stephen Witt enjoys a ginger ale after the procedure – using his right hand. This would not have been possible for him before the procedure. 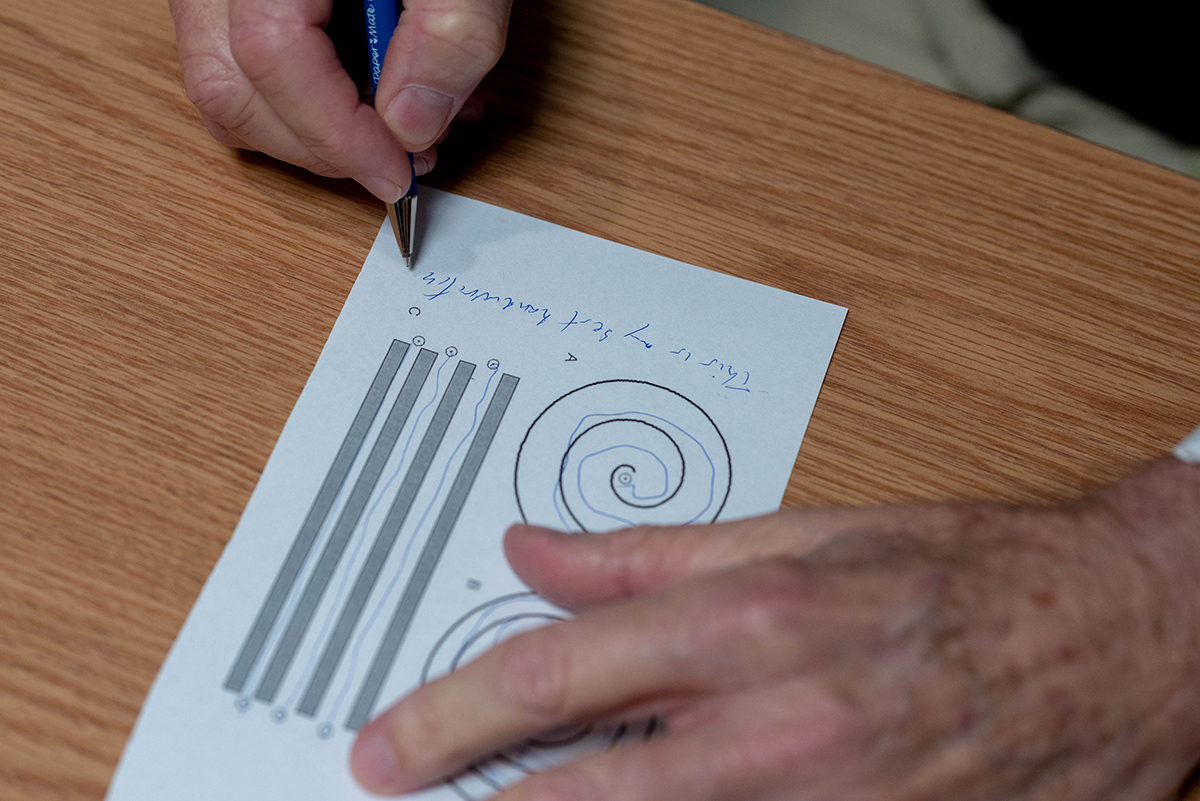 Above John Early, post-procedure, tests out his handwriting and ability to draw within lines. He is now able to write legibly and draw with his right hand.

“Currently, there is a lot of interest in using focused ultrasound to activate the immune system, and while it’s early, that is certainly exciting,” he said.

In fact, Elias said, “There is so much promise and excitement for different treatments, that it can be hard to know what to focus on. There are so many different ways this technology can be used, and a lot of work to be done.”

If the progress of the past 10 years is anything to go by, the future is bright.

“When you look back at how far we have come, there are now pretty significant treatments happening routinely, things that we were only just beginning to think of even a few years before,” Elias said. “It’s exciting to think about other problems we could solve, what else could become routine.”