A River Runs Through: Pipeline of Players From UVA to NBA Is Strong 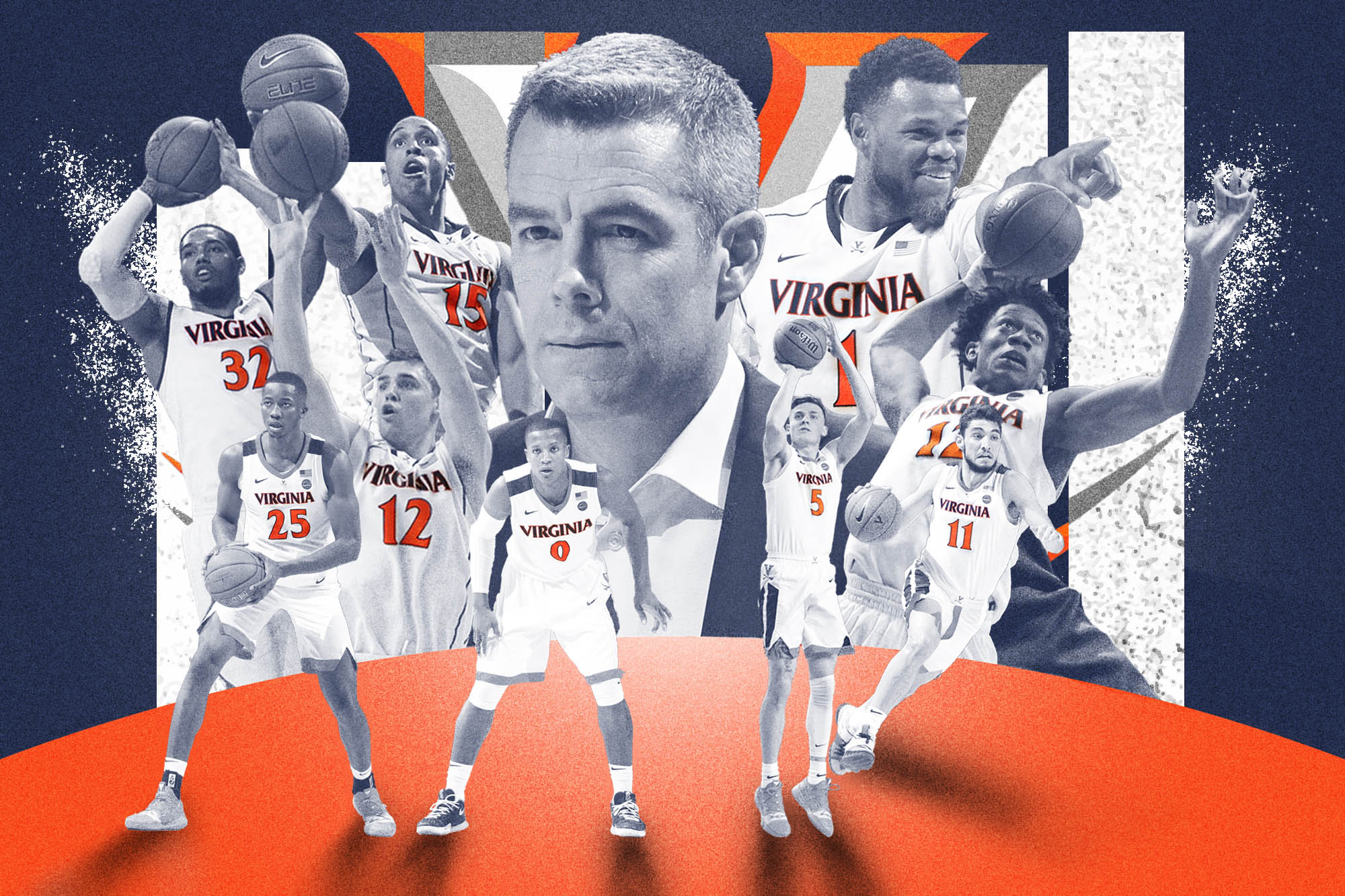 A knock on University of Virginia basketball coach Tony Bennett used to be that his defense-first, patient-offensive system supposedly couldn’t help players get to the run-and-gun NBA.

Much like the notion that the system wasn’t conducive to winning in March – or that it resulted in a “boring” style of play – it seems kind of laughable now, doesn’t it?

At the start of last season, eight UVA alumni appeared on NBA rosters, which tied for the sixth-highest total of 350 Division I basketball programs.

The best part about it all? Many of these NBA Hoos have been putting their fame and fortune to good use, most notably with the building of wells in east Africa, an alumni project spearheaded by Malcolm Brogdon.

On Thursday night, Trey Murphy III is expected to be the latest Hoo to join the NBA ranks. Several mock drafts project that the 6-foot-9-inch wing, known for his sweet 3-point shooting stroke, will be selected in the first round of the NBA Draft.

Meanwhile, Murphy’s teammates, Sam Hauser and Jay Huff, reportedly have the chance to be picked in the second round – or, at the very least, to sign free-agent contracts after the draft. 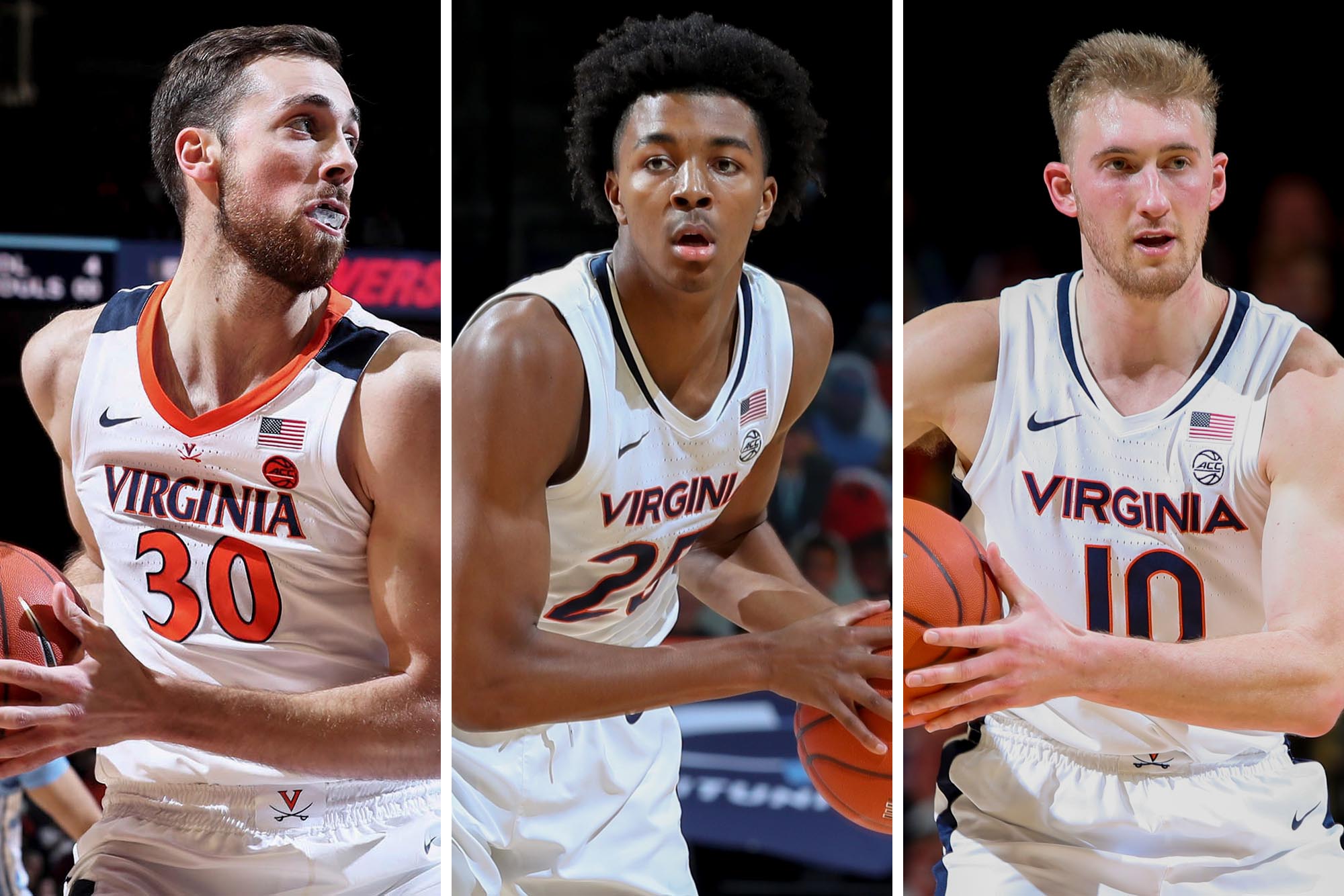 Here’s a look at the 12 Cavaliers who have played under Bennett, then gone on to play in the NBA, starting with 2020 alumnus Mamadi Diakite, who won an NBA championship with the Milwaukee Bucks last week, becoming the first native of Guinea to do so. 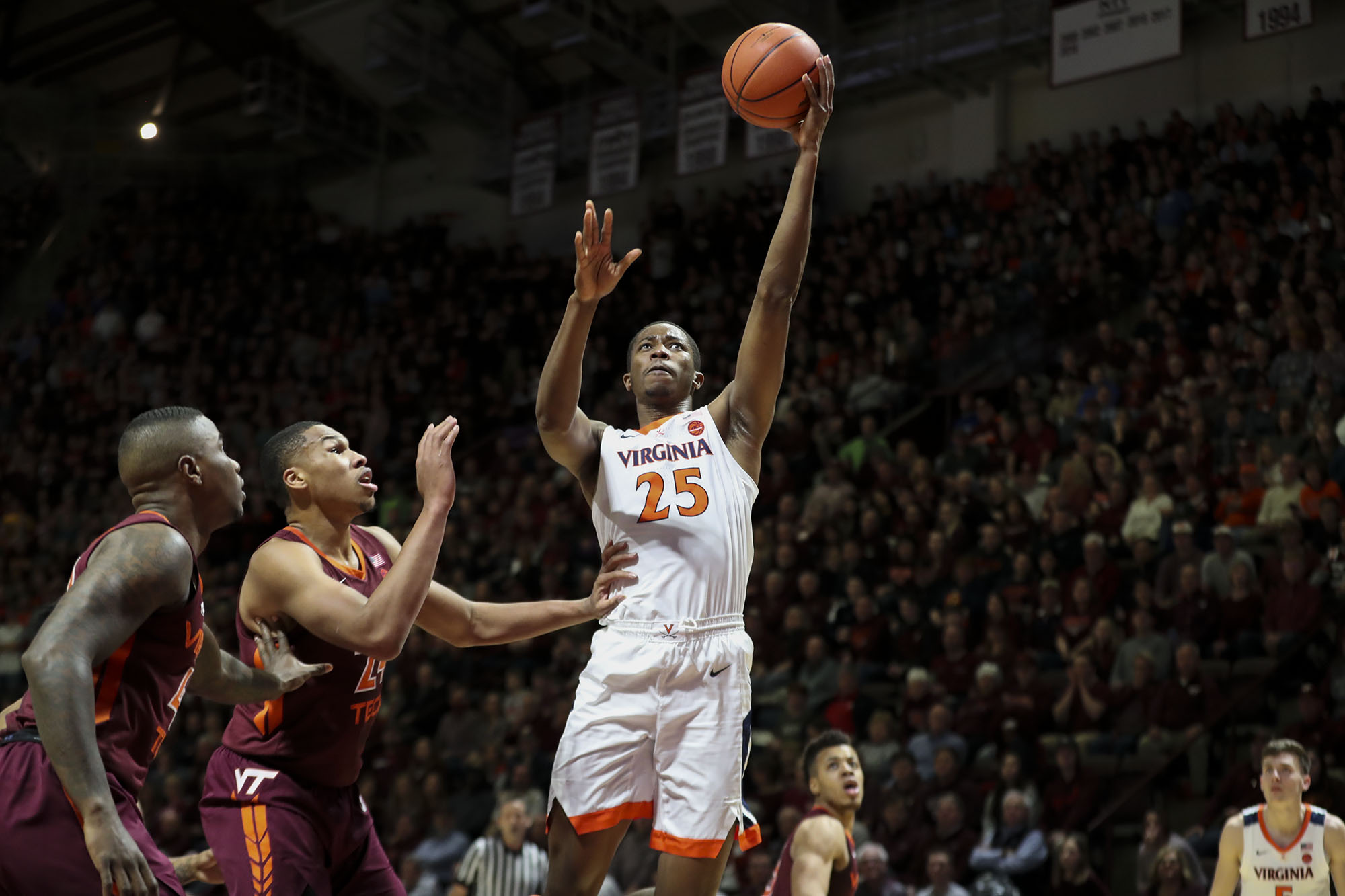 After going undrafted, Diakite – whose shot against Purdue University will forever be etched in March Madness lore – paid his dues in the G-League before signing a multiyear contract with the Bucks as a free agent this past season. An inspiration for John Grisham’s latest book, the 6-foot-9 forward has now won a high school state title (at Blue Ridge School) and championships in the NCAA, G-League and NBA. Even Grisham couldn’t have made that up.

Another Hoo who was overlooked in the draft, “A.G.” started his career in Turkey before signing a contract with the Washington Wizards last season. Gill scored a career-high 13 points against the San Antonio Spurs in April, just a couple days after grabbing a career-high 10 rebounds against the Oklahoma City Thunder. 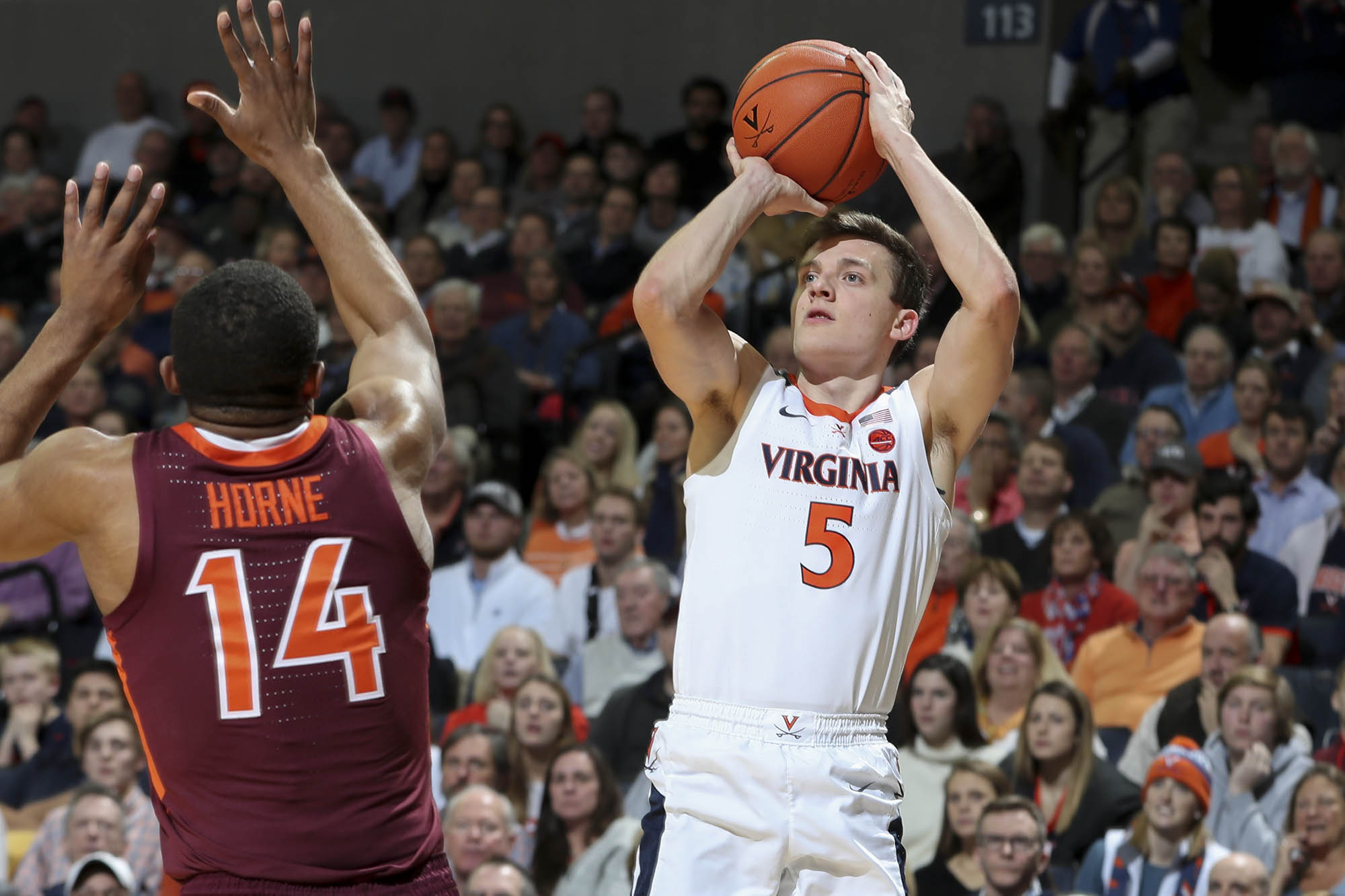 Picked in the second round of the 2019 draft by the New York Knicks, one of the heroes of the Hoos’ 2019 title run was immediately traded to the Sacramento Kings, where he has made the most of his playing time, become a fan favorite and a soon-to-be father. Guy poured in a career-high 17 points in a game against the Golden State Warriors in March. 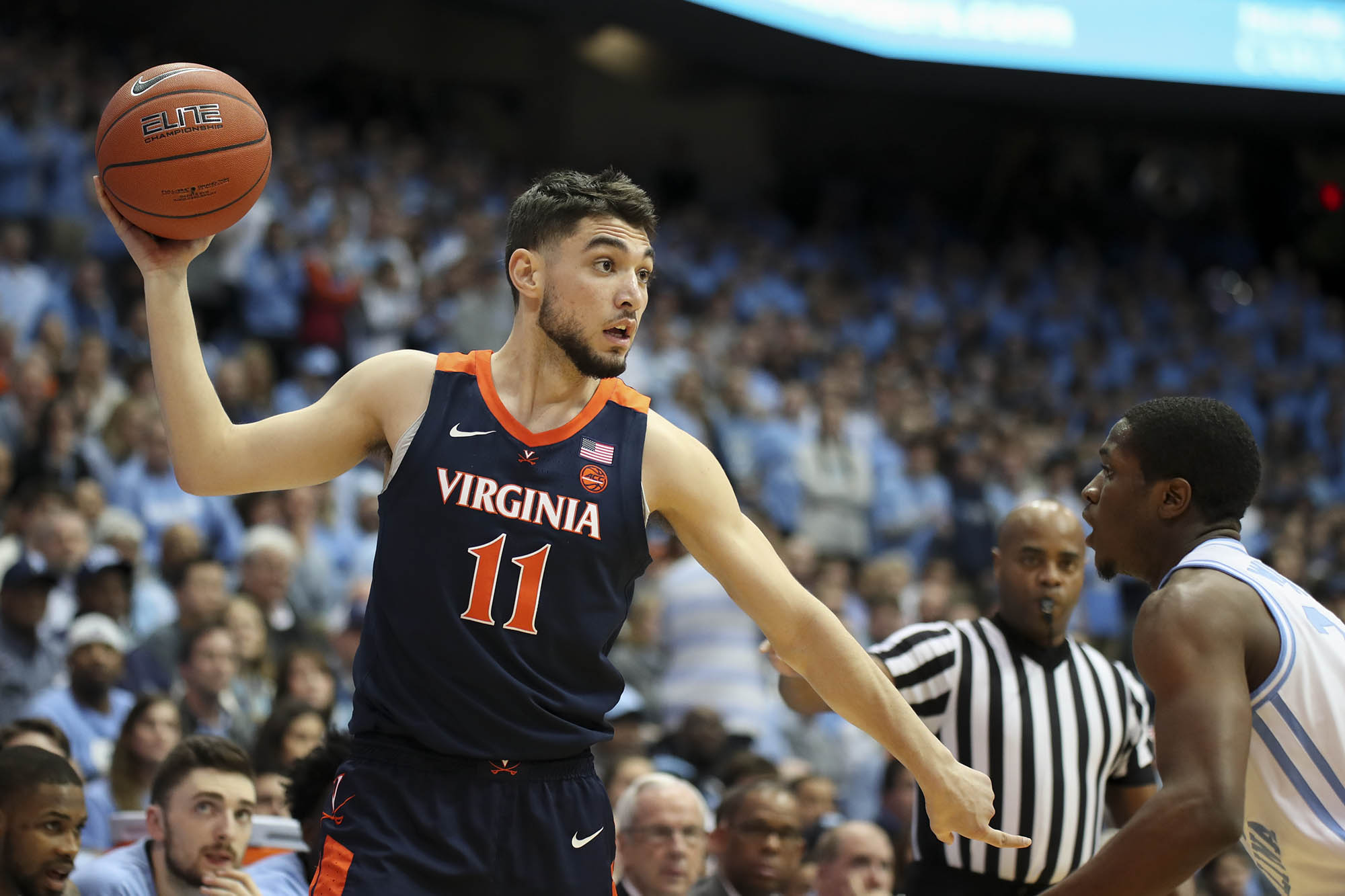 After getting picked in the first round of the 2019 draft, Jerome wound up getting stuck behind veterans on the Phoenix Suns and didn’t play much, but he has come into his own since being traded to the Oklahoma City Thunder, averaging 10.7 points and 3.6 assists last season. One of Jerome’s best outings came against the Atlanta Hawks, when he drained six 3-pointers. 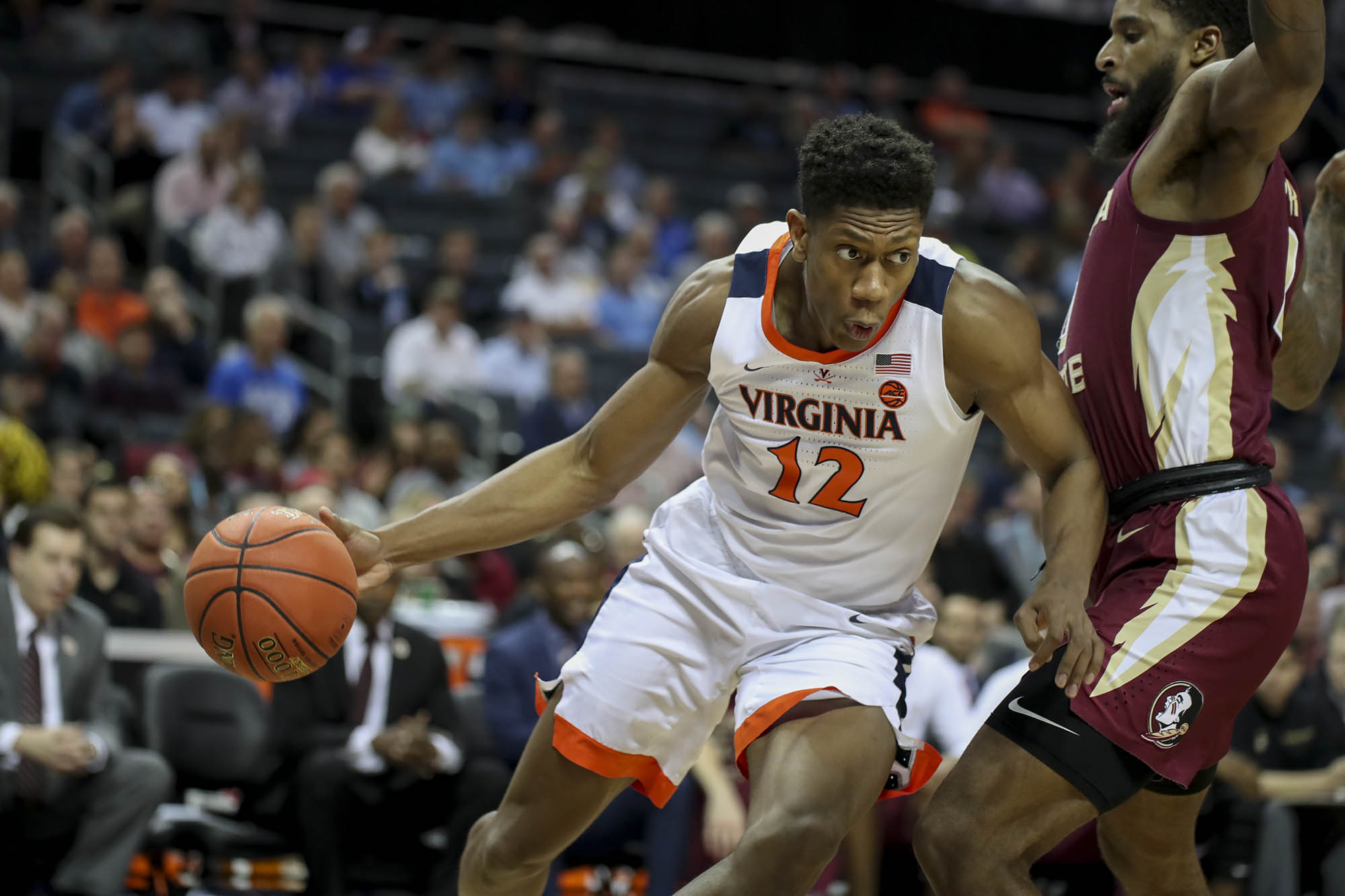 Hunter was the fourth overall pick in the 2019 draft, the highest selection of the Bennett era and the second-highest in UVA history (after Ralph Sampson, who was picked No. 1 overall in 1983). Despite a few injuries, the forward for the Atlanta Hawks has shown worthy of the selection, shutting down Duke University alumnus R.J. Barrett – picked one spot before him – in the first round of this past season’s playoffs. 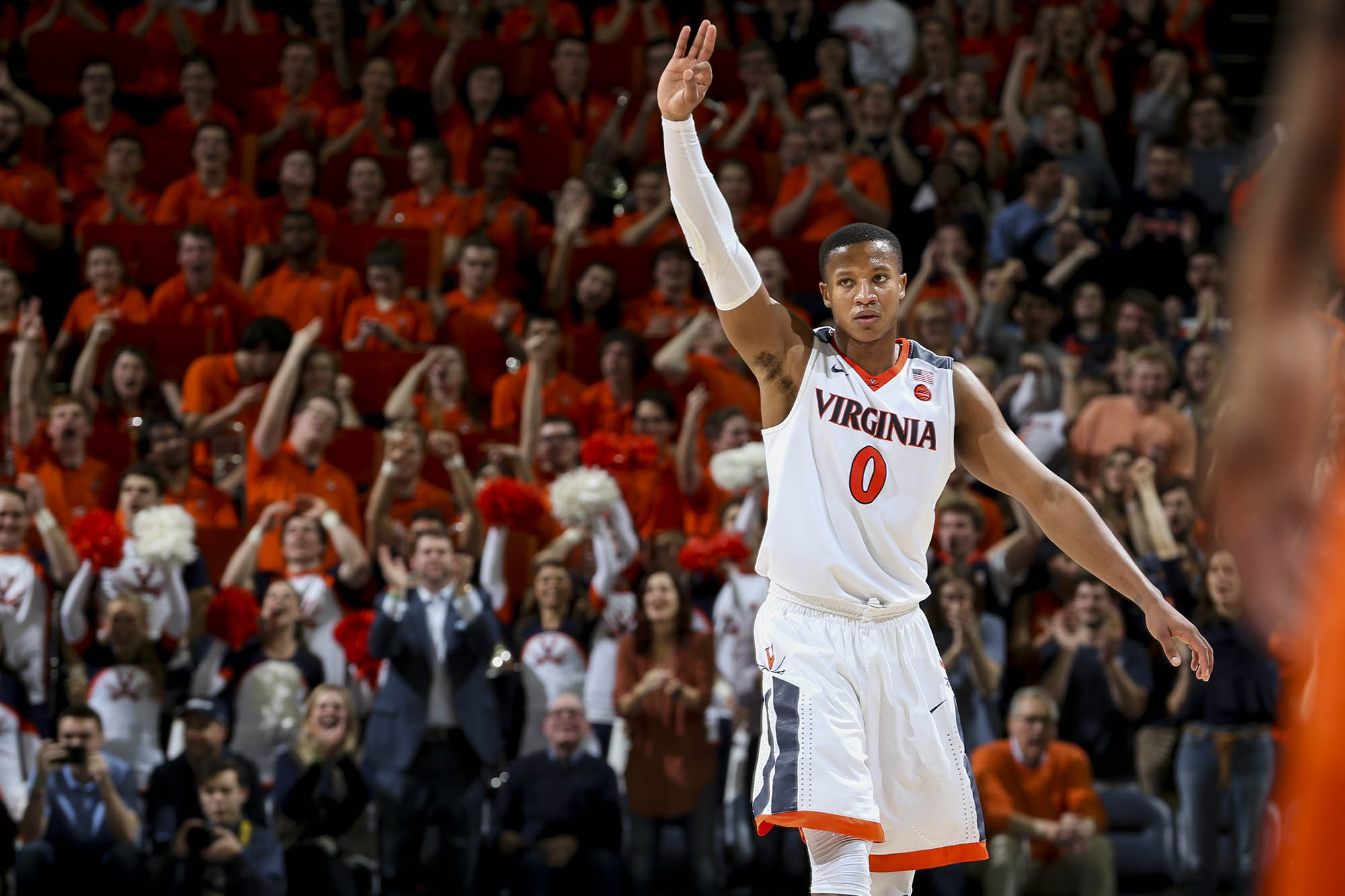 Picked by the Oklahoma City Thunder in the second round of the 2018 draft, Hall played in a handful of regular season games while bouncing back and forth from the club’s G-League franchise. Last month, he signed a two-year deal with Italian club Olimpia Milano of the Euroleague, considered the best league outside the United States.

After going undrafted in 2017, Perrantes ground away in the G-League, eventually earning a two-way contract with the Cleveland Cavaliers and making his NBA debut that season. The point guard from California, who started in 134 of 138 games at UVA, has played abroad and in the G-League since.

After going undrafted, the 7-footer with the sweet outside touch played for the Charlotte Hornets briefly in 2017 before stints for several clubs in Europe. Following a strong performance this summer with the Slovenian national team – he’s playing with Dallas Mavericks superstar Luka Dončić in the Olympics – Tobey’s playing career seems on the rise. 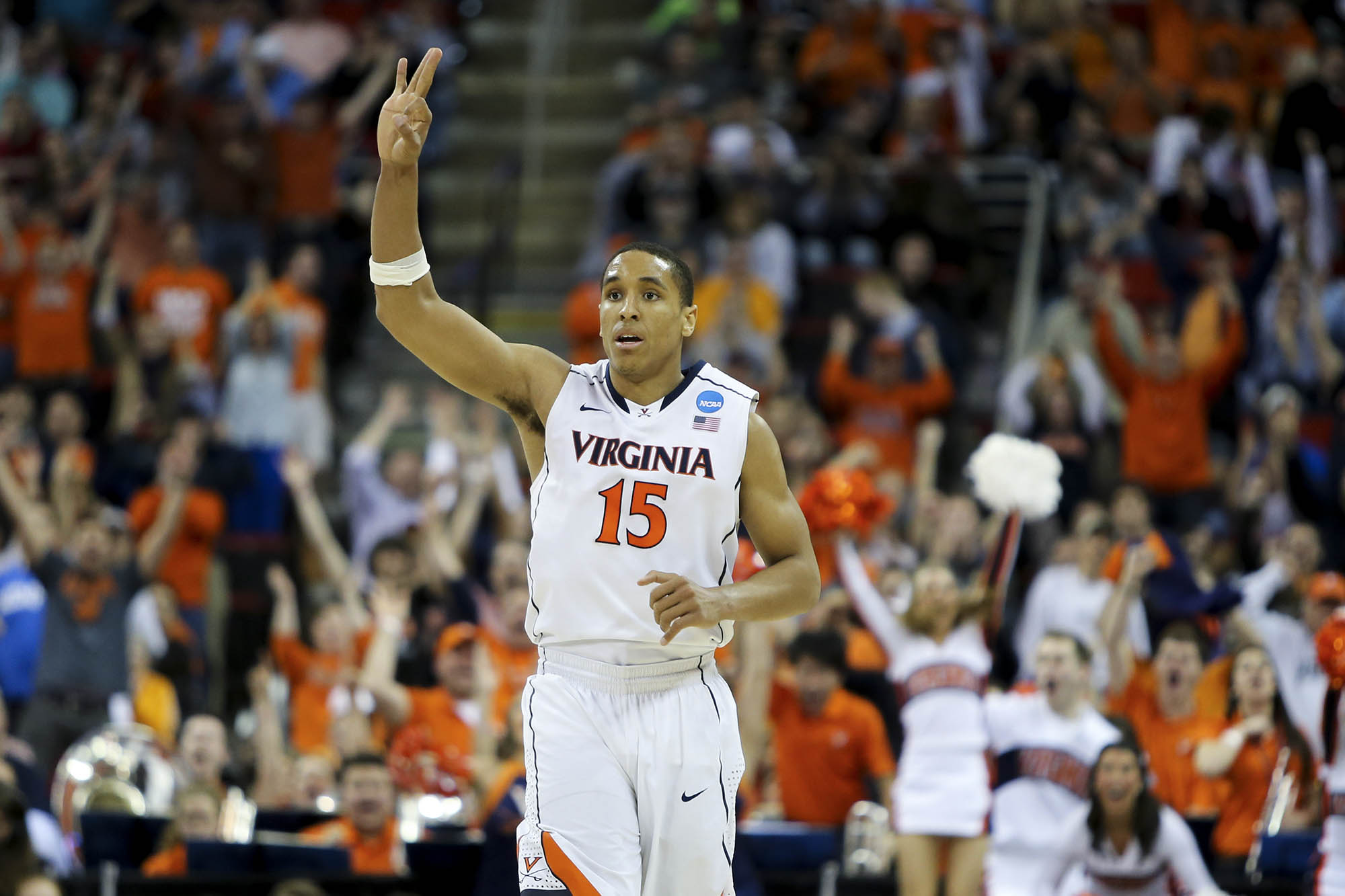 Brogdon somehow slipped to the Milwaukee Bucks in the second round of the 2016 draft, then won NBA Rookie of the Year. During the 2018-19 season, Brogdon – who now plays for the Indiana Pacers – became just the eighth player in NBA history to shoot over 90% from free-throw line, 50% from the field and 40% from 3-point range. But Brogdon, as has been well-documented, is about much more than basketball. 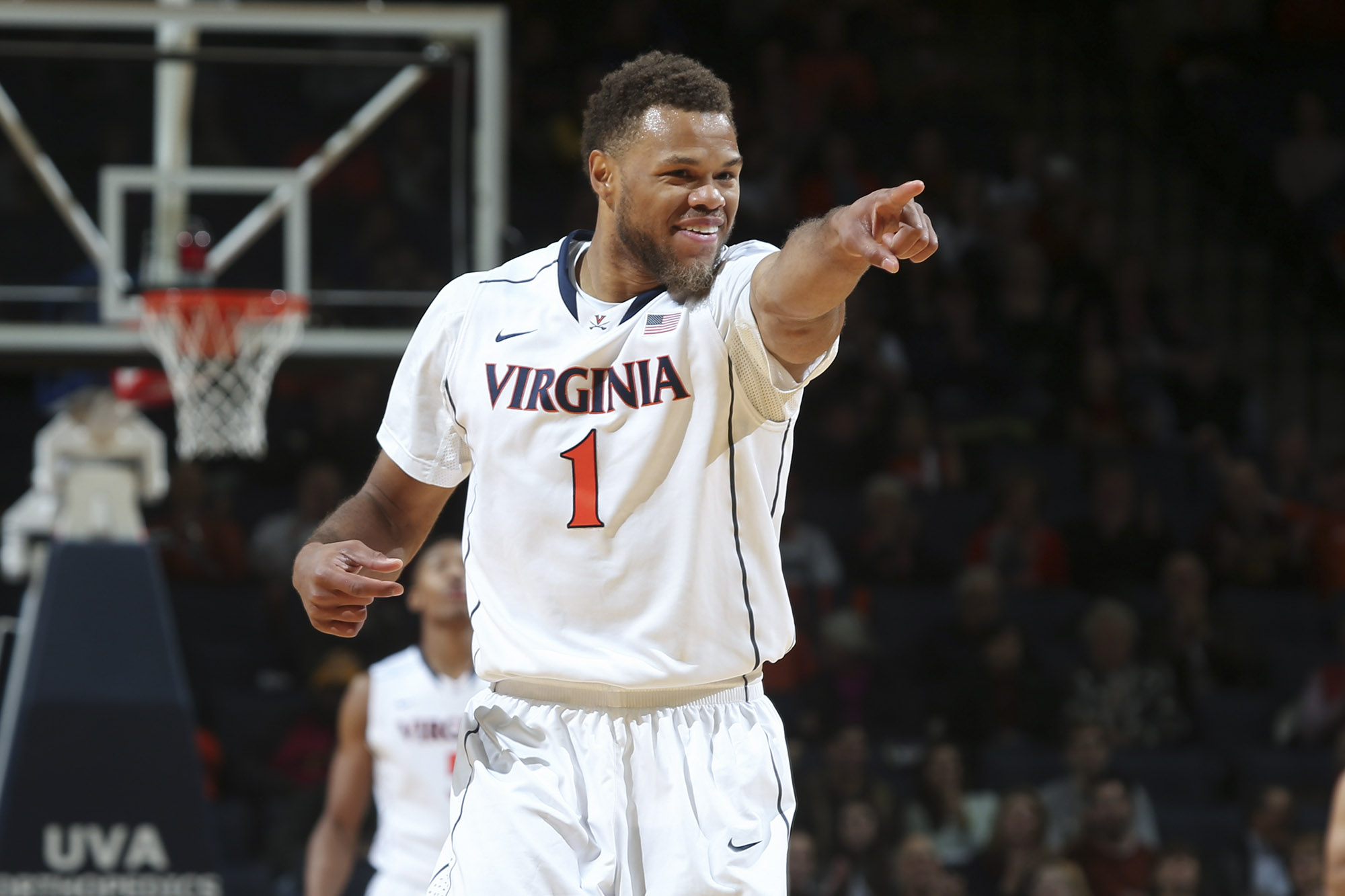 The Dallas Mavericks made the high-flying Anderson, a fan favorite during his time at UVA, their first-round selection in the 2015 draft. Since then, Anderson has spent time with Philadelphia 76ers, Atlanta Hawks and Brooklyn Nets, scoring a career-high 26 points as a member of the Sixers in 2017. 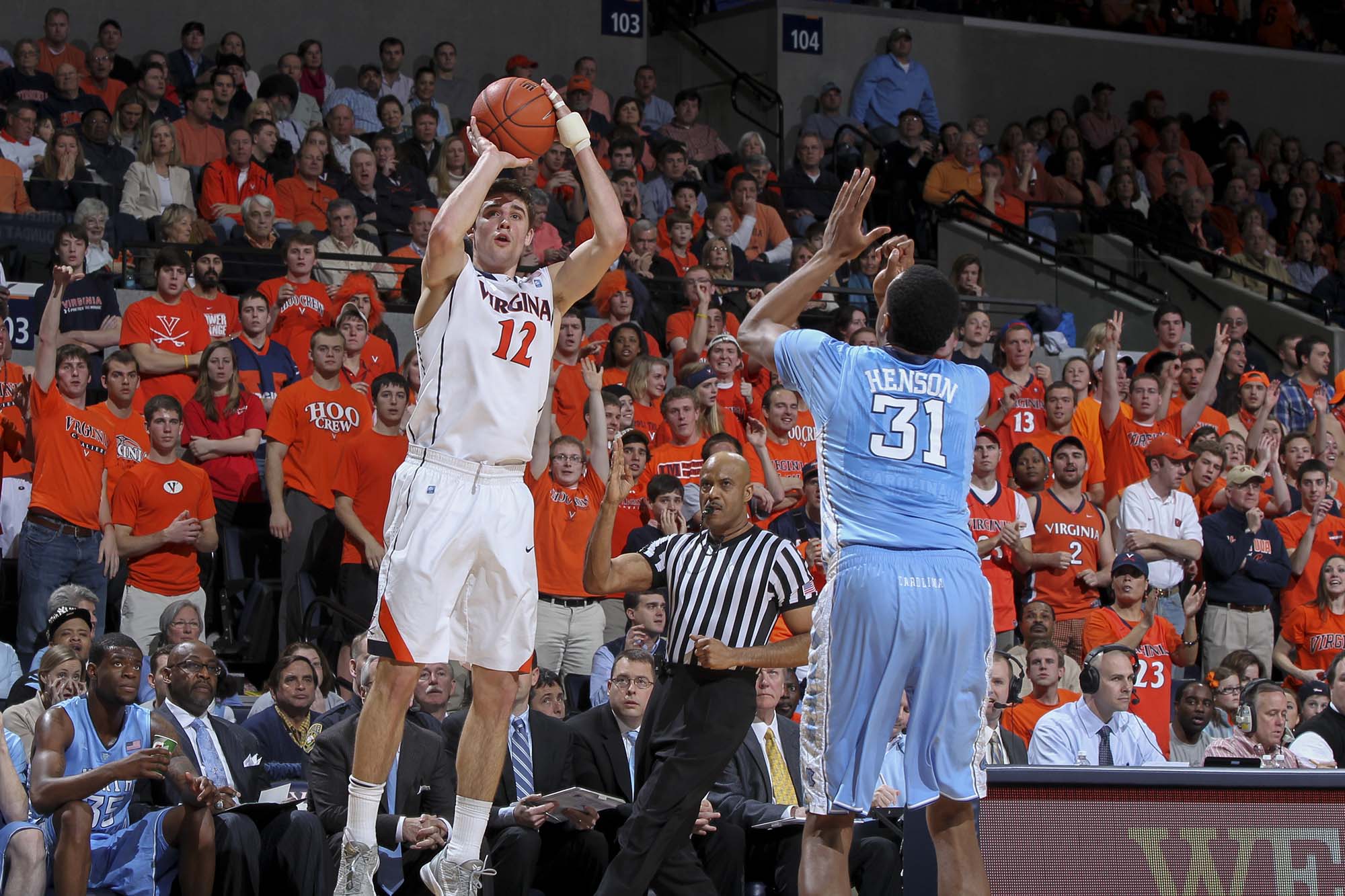 “Joey Hoops,” a member of Bennett’s first recruiting class, was a second-round choice of the Cleveland Cavaliers in 2014. After playing sporadically with LeBron James’ squad, Harris suffered an injury and was briefly out of the NBA before resurrecting his career with the Brooklyn Nets. He defeated Golden State Warriors superstar Stephen Curry in the 2019 3-Point Shooting Contest, among many highlights. 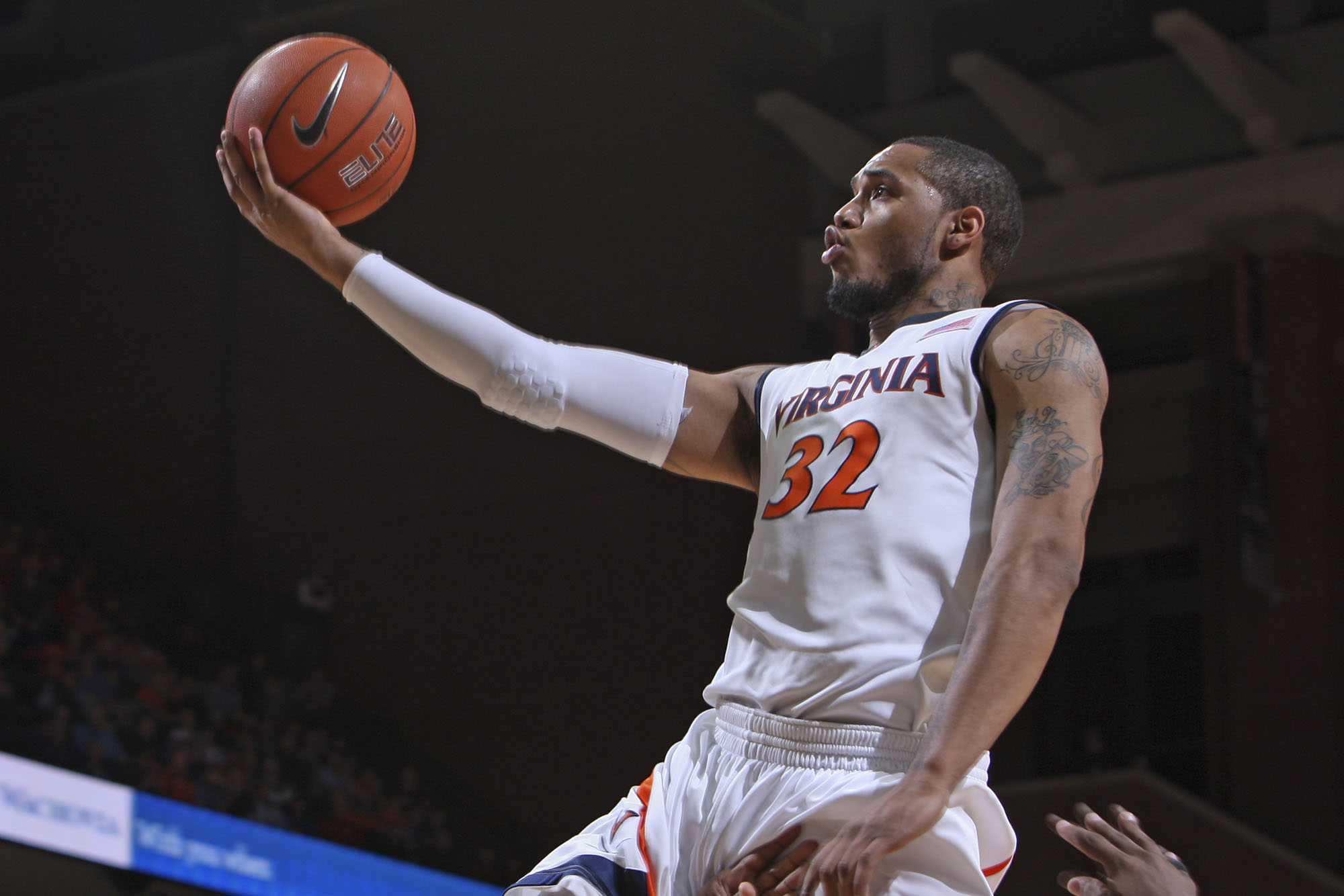 Originally recruited by former UVA head coach Dave Leitao, Scott came into his own under Bennett, making the All-ACC first team before getting selected by the Atlanta Hawks in the second round of the 2012 draft. Scott, now with the Philadelphia 76ers, has become the prototypical “stretch four” (a big guy who can shoot 3-pointers), carving out a nine-year career in the league.